Fear and Bicycles: A Lesson in Learning

"Fear, more than anything else, is what blocks us from learning new concepts, skills, or processes."
When he was eight, I taught my son to ride a bicycle. He learned in less than a day without training wheels. What superpower did we tap into to achieve this feat? The power of overcoming fear.

Fear, more than anything else, is what blocks us from learning new concepts, skills, or processes. Whether you are teaching your kids or a group of adults, we have to attack this emotion head-on, and we can do this following the process I used with my son.


I. Remove the Pedals
II. Support - But Not Too Much
III. Let Them Ride
IV. Stop Lecturing and Start Cheering

When we first assembled his bike, my son was shocked when we left the training wheels off. He looked at me and said, “I need them to learn how to ride; after all, that’s why they are called training wheels.”

So why did my son insist he needed training wheels? He was afraid of falling and getting hurt, of course.

Adults face the same fear when they have to learn something new. Instead of worrying about falling or getting hurt (unless they are construction workers building a high-rise), they are afraid of failing or making mistakes on the job. 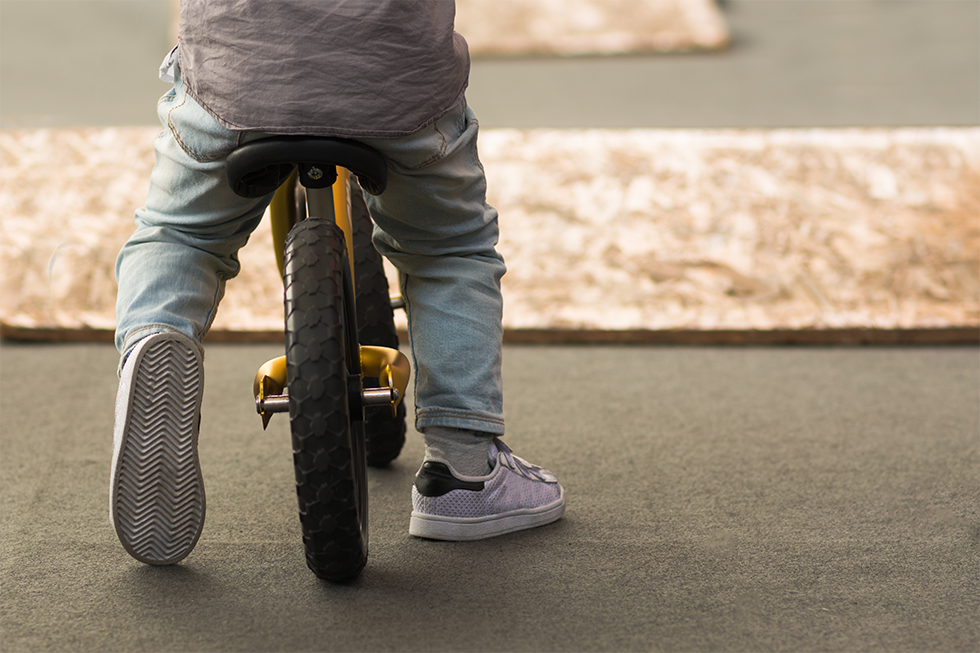 To remove that fear for my son, I took off the pedals and had him practice coasting in straight lines. By letting him “simulate” riding the bike, he could practice keeping his balance with the knowledge that if he fell, he could catch himself. Plus, he only had to concentrate on one skill, balance. After all, he could stop by using his feet and didn’t have to make turns.

In the learning and development world, we know that simulations and role-plays are highly effective because they allow the participants to practice and master a skill. However, we sometimes forget it does something else; it removes the fear by giving them a chance to focus on one skill at a time and then catch themselves if they start to fall.

Support — But Not Too Much

When my son was ready to try pedaling, I made the mistake of trying to support him by holding one hand on the handlebars and the other on the back of the seat.

While at first, he was comforted by this extra support, I quickly realized I was in control; he wasn’t, and when I let go, he would veer off to the side and almost crash. So I started just holding on to just the back of his seat. After several assurances that I wouldn’t let go, he agreed, and we tried again. It only took a couple of shaky starts for him to learn how to keep the bike straight while pedaling.

Adults learn by doing and by being in control. As facilitators, if we insist on taking control to eliminate mistakes, we are shortchanging our participants. On the other hand, without the assurance we are there to help if they get in over their heads, their fear will kick in, and they won’t try.

While we were first getting started, I offered lots of encouragement, but when I felt my son was in control and well balanced, I just let go. I didn’t say anything or make a big deal because I didn’t want to remind him of his fear. He just rode.

It wasn’t until he stopped himself that I showed my excitement. That’s when I congratulated him. If I had yelled, “You’re doing it” or something like that while he was still riding, that would have opened the floodgates of fear and self-doubt. Just like in the old cartoons, where the character is perfectly able to run off the cliff and suspend herself in mid-air until she realizes she isn’t on the ground anymore.

While you should encourage your participants, if you wait to celebrate success until after a task is complete, there is no room for doubt or fear; after all, they did it. It’s hard to say you can’t do something you just completed.

At this point, I stopped being a teacher and started being a cheerleader. I held his seat a couple more times while my son learned to get started, but I didn’t tell him anything else. He figured out how to get himself going, steer with more precision, and what happens when he hits a curb that is too big for his bike.

As he was flying through the air (okay, it seemed like flying, he just fell over), I fought the urge to run over and comfort him. Instead, all I did was tell him he was doing a good job and helped him up. After some encouragement, he hopped back on his bike and kept riding.

We need to let out participants fail in the classroom, and when they do, help them up and offer encouragement. Don’t give them a lecture; let them absorb and interrupt the lesson themselves. Sure, we will sometimes need to guide them with a couple of questions like, “Why do you think that happened?” Or, “What could we do differently next time?” We should help the learner discover the answers themselves rather than explaining everything to them.

Once you give adult learners the basics they need to know for a skill or a task, let them do it and discover the details themselves. Not only will they remember the process, but by solving the problems they run into, they build confidence and remove all fear.

In learning, fear is the enemy, but we, as learning and development professionals, can defeat it using these four easy steps:

Our courses, coaching, and consulting will help unleash the exceptional you!